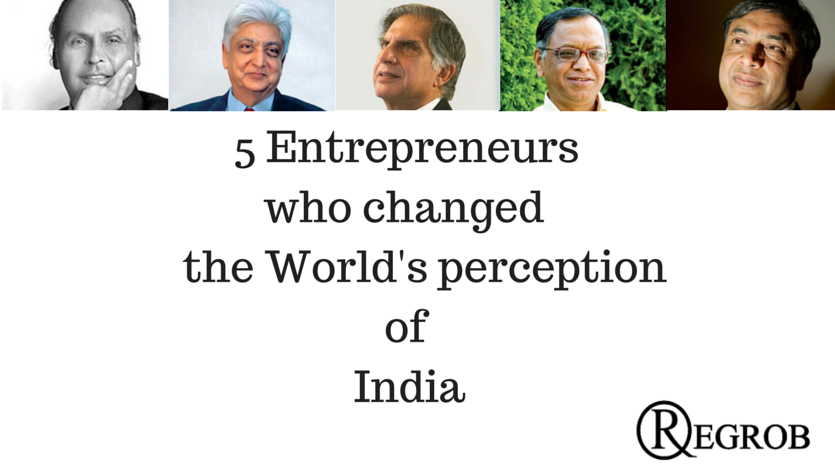 The Indian Entrepreneurs who changed the perception of the world

The real estate brokerage is one of the sectors in India ,which does not command the respect , it actually deserves .Regrob envisions to provide an identity to a real estate agent ,which will completely change the perception of the world towards the Realtors. In order to accomplish its vision Regrob draws inspiration from the following entrepreneurs who completely changed the perception of the world.

Dhirajlal Hirachand Ambani better known as Dhirubhai Ambani, though he is no more amongst us but still continues to rule each and every Indian’s heart.  He was the founder of Reliance group and is among the most respectable entrepreneurs of India. Dhirubhai Ambani was named the “Man of 20th Century” by the Federation of Indian Chambers of Commerce and Industry.

Gentle and humble, Ratan Tata is the undoubtedly the most admired entrepreneur of India. Ratan Naval Tata may have inherited the business, but he took Tata group to the heights making it India’s biggest business entity. He is not only the most admired in India, but his acquisitions around the entire globe makes him admired even internationally.
Tata’s foreign connection includes the American International Group, JP Morgan Chase Booz Allen Hamilton and Mitsubishi Corporation. He acknowledged the Padma Bhushan award in 2000 and 2008 and Lifetime Achievement Award awarded by Rockefeller Foundation in 2012. Following his own ideals Ratan Tata stepped down as the CEO of Tata group in Dec 2012.

Perhaps India’s most incredible rags-to-riches story, Mittal owns a steel empire from London as chairman of ArcelorMittal and is considered as one of the richest man of the world. Mittal belongs from a small village in Rajasthan, India and instead of being one of the richest personalities Mittal’s humble nature gained him millions of fans.Among the various recognitions and awards Mittal has been named “Business Person of 2006″by The Sunday Times; the Financial Times named him “Person of the Year”2006. In 2007, Time magazine included him in their “100 most influential persons in the world”.

The man transformed his family’s vegetable oil business into India’s second largest software firm. The company is none other than Wipro and the man is none other than Azim Premji. In 2010 Premji turned 213 million equity shares of Wipro to Azim Premji Trust and pledged to donate $2 billion for improving school education in India. This has been the biggest donation in India.

Nagavara Ramarao Narayana Murthy is the co-founder and chief adviser of India’s best known software firm, Infosys Technologies Ltd. Even after stepping down as the CEO of the company in 2002, Murthy still continues to be among admired business men. He is among the advisory and board members of many reputed universities like Harvard, Stanford, and Yale, is the IT adviser to several Asian countries.