“On the desk before me was a cheque in my favour of Rs.26 lakh or Rs 2.6 million—being the approximate book value of the shares. It was the amount I would get for severing my links with DLF, forever. It was January 1975. I picked up my pen to sign a share transfer form. I was about to sell all my shares in DLF ”  Singh recalls in his book, released Monday by legendary corporate visionary , former General Electric chief Jack Welch.

However he resisted , that resolve paid off handsomely – the market capitalization of DLF today is $7  billion. In fact in 2012 it was three and a half times higher. “Had I signed it, my DLF story would have ended there and then. My life would have been entirely different.” says the 80-year-old entrepreneur who put Gurgaon on the global outsourcing map.

According to him , the decision was taken on his behalf by his father-in-law, Chaudhary Raghvendra Singh, from whom he had inherited the business and there was no question of any disagreement. “That was the culture in our families .” But the company’s then financial advisor, Y.S. Tayal , warned him and asked him to re-think. “It was a wake-up call for me. In a flash , I realized the truth of what he was saying and the implications of giving away my DLF shareholdings.”

Delhi Land & Finance, or DLF, a company set up by Singh’s father-in-law, Chaudhary Raghvendra Singh, had developed no fewer than 21 colonies in Delhi between 1947 and 1961, when all development in the capital city was taken over by the Delhi Development Authority. That had forced DLF to diversify into batteries, cables and so on. Twenty years later, on May 12, 1981  an incident  nurtured hopes Singh’s  mind of getting back into township development.

On this particular day Singh was sitting all by himself on a cot next to the well , in the wilderness beyond Delhi called Gurgaon  , with just two keekar trees for shade. A Jeep stopped as its engine had got overheated and the driver was looking for some water to cool it.  In the Jeep was Rajiv Gandhi , who just had entered politics and had big dreams to fast-track India to the 21st century.The two men got chatting under the trees and a couple of hours later, Gandhi was convinced that the laws constraining the sector needed to be liberalised. “ It was turning point for not just DLF but also for urban development in the country” , Singh remembers 25 years later. 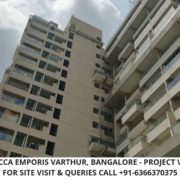